What I'm Working On: AMadison 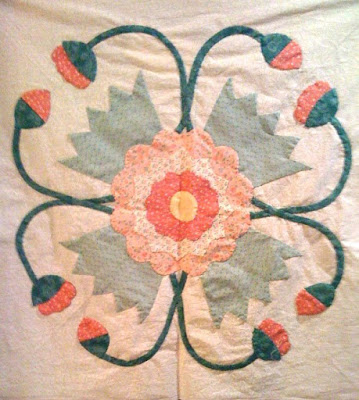 I’ve been working on something that’s a radical departure for me, the construction of a chuppah or Jewish wedding canopy for my son’s wedding in November. Because I started out as a quiltmaker many years ago, the canopy will be in the form of an appliquéd quilt. Including its border, it will be 72” square. That’s not quite big enough to cover a bed, but they will be able to use it in their home after the ceremony. I chose traditional block patterns. Most of the materials are figured calico, so it’s not fine enough to be called a Baltimore Album quilt.

Here’s a picture of the first block as it nears completion. It’s a bit wrinkled and wrunkled, and it will need to be ironed, but it’s also due to receive sixteen little green leaves, which I’m cutting out and hemming at the moment. This block is the Whig Rose. The other blocks will be the President’s Wreath, the Wreath of Grapes, and a block known as “Conventional Tulips.” The border will be a rippled swag in best presentation quilt style. We’ll attach the quilt to the canopy supports with some ribbons which can be removed later.

Email ThisBlogThis!Share to TwitterShare to FacebookShare to Pinterest
Labels: amadison, weddings finds, what i'm working on