What I'm Working On: Atelier Beads

Quilted with love for a bride and groom. 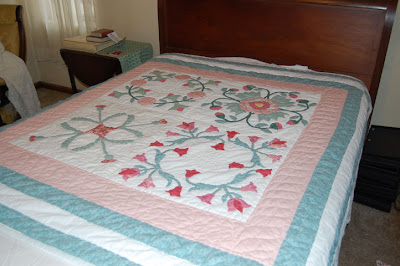 From June to November of 2009, I spent some time away from my beadwork to work on a very special project. I created an Album Quilt in honor of the marriage of my son, Gregory. His bride-to-be, Erika, approached me earlier in the year to ask if I would make a quilt block to
embellish their chuppah, or wedding canopy. In the Jewish tradition, the chuppah symbolizes the couple's home, their hospitality to guests, and the presence of God above them. The marriage ceremony is conducted beneath it. One quilt block seemed a bit skimpy to me, so I set about designing the entire canopy--a six-foot square. The quilt can also be used as a counterpane on a double bed.


I chose two very old traditional applique blocks and designed two of the blocks myself. I abandoned the traditional Nineteenth Century vivid colors (red, green, and yellow) in favor of lighter shades of the same colors (rose, pale yellow, blue-green). The quilt is entirely hand stitched and hand quilted. The first block is an old design called the
President's Wreath. It was often used in presentation quilts and is symbolic of the importance of the occasion. 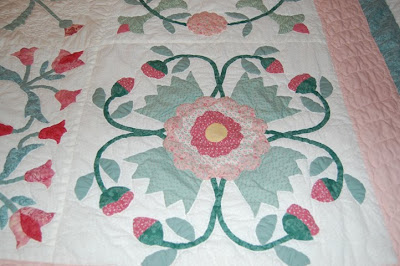 The second block is the traditional and very complex Rose of Sharon. This pattern is found in more variations than any other American quilt block. It honors the bride with a verse from the Song of Songs (I am the rose of Sharon and the lily of the valley...). The third block is my own design and is intended to honor the groom. It depicts a thistle, national flower of Scotland. 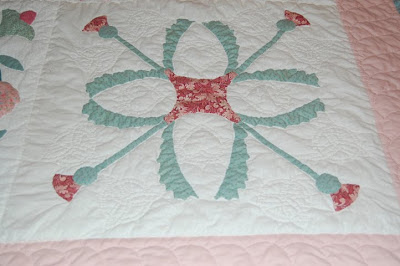 Because it is so plain, it is the most heavily quilted of all the blocks, incorporating old Scottish and Irish love tokens. The fourth block is also my own design, featuring a wreath of tulips. It's intended to evoke memories of the couple's honeymoon in Amsterdam. 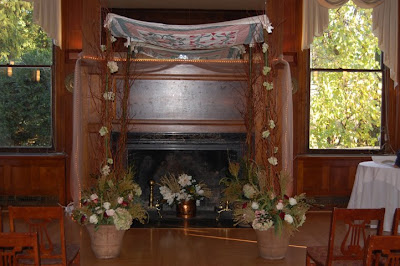 The final picture shows the chuppah in place awaiting the bride and groom.

Written by Anne of Atelier Beads
Posted by BEST BLOG at 9:23 AM

Email ThisBlogThis!Share to TwitterShare to FacebookShare to Pinterest
Labels: atelierbeads, what i'm working on

Amazing! What a loving gift.